Down and Out in Paris (and London)

I'd finally reached the end of my trip and climbed onto the plane, looking forward to a relatively quick overnight hope via Paris to home, back in the UK in time for lunch on Saturday. Unfortunately the weather gods had other ideas, and we landed in Paris just as the snow descended on Heathrow. I'd got talking to Sarah, the girl sitting next to me on the flight, as we left the plane in Paris and it turned out we were both on the same flight to London, so we headed over to the gate together. We arrived to find our flight was delayed, and checking online (the advantage of being with someone with a laptop!), the news seemed to suggest that Heathrow had been closed due to the extreme snowfall.

Of course, nobody could tell us anything, so all we could do was wander round the airport, heading back to the gate every hour or so to see if there was any change. By lunchtime, it was clear Heathrow was closed, and our only chance of getting home that day was if the snow magically cleared by 5pm. All we could do was wait, as the snow arrived in France and turned the world outside white. Eventually, the flight was formally cancelled about 5.30pm, and we had to then queue for a couple of hours to get vouchers for food and allocated a hotel for the night. I was really glad to have some company - both for someone to talk to, but also because it made life so much easier if one person could queue whilst the other tried to find out what was going on. Whilst feeling sorry for ourselves, some of the others in the queue made us seem pretty well off. Worst was a young couple with a 3 year old and 6 month old sons. The husband was South African, and they were returning from visiting his family out there. At one point, they were being told that his wife and children could leave the airport and stay in a hotel, but he would have to stay, as he didn't have a French visa! This was all too much for her, and the tears started flowing. Fortunately they seemed to managed to sort it out, but still the thought of enduring this with small children made me feel a lot better off. 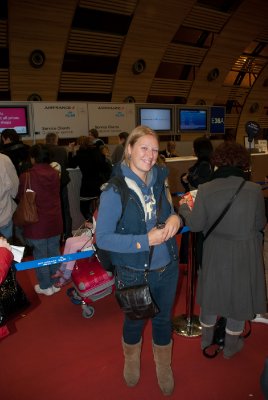 Eventually we got to the front of the queue and were given vouchers for food and allocated a hotel for the night. After grabbing a bite to eat, we finally left the departures lounge for the first time that day, exiting into the freezing cold. At this point I started to really regret not planning better - all I had packed in my carry-on was one fleece, so I was wearing lightweight shoes, lightweight trekking trousers, a shirt and one fleece whilst standing in the freezing cold snow, which was still falling heavily. Quite a rude introduction to Europe! Eventually they found a bus to take us all to the hotel , where we finally arrived about 9.30pm. We'd got chatting to a couple of others on the bus, and after dropping our stuff in our (surprisingly nice) hotel rooms, we headed out in the snow to find somewhere for a beer. Several hours later, we were rolling around in a random bar, being plied with free beer by the friendly, but slightly strange barman. 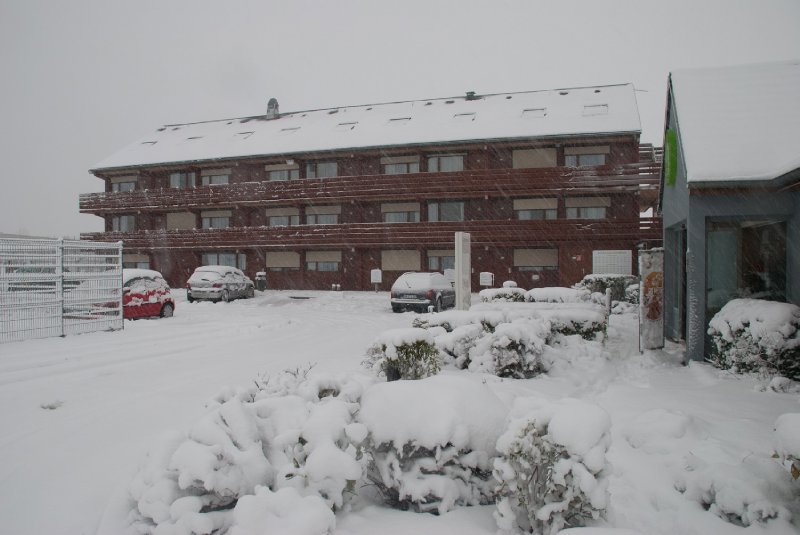 Eventually, we got to bed, waking up the next morning with stonking hangovers, which plenty of hot coffee and croissants could only partially alleviate. Our bus taking us back to the airport was delayed by the snow, and at least a couple of people had already missed their flights by the time it arrived at 10.00am. We slipped and slid our way back to the airport through a winter wonderland, thankfully making it without getting stuck. Sarah's parents actually lived in France, so she had decided to do the sensible thing and abandon her attempts to get back to London and go straight to them. I said goodbye, then spent the rest of the day in an interminable set of queues running round the airport. My flight had already been cancelled, and there was virtually no information about what was happening or where to go. As I didn't even have a mobile, I had no way of getting info either, which was incredibly frustrating. Eventually, after almost 10 hours of queuing, I made it to the front desk, where they managed to put me on a flight early the next morning. 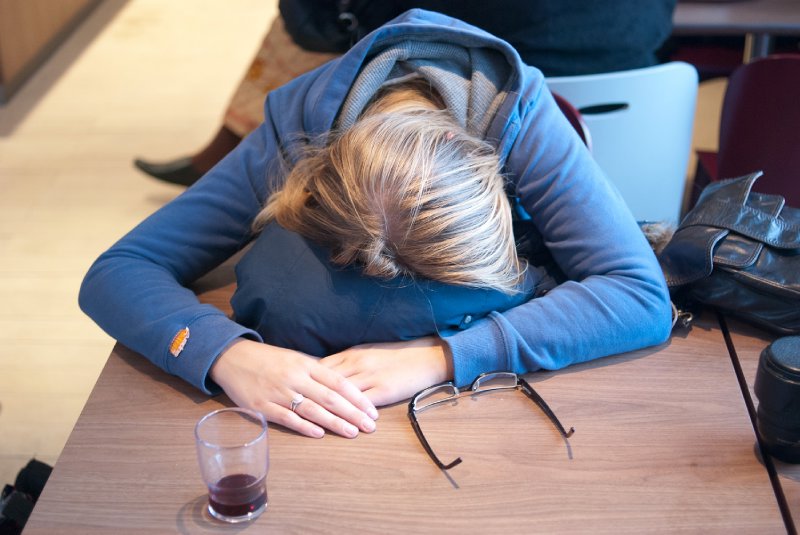 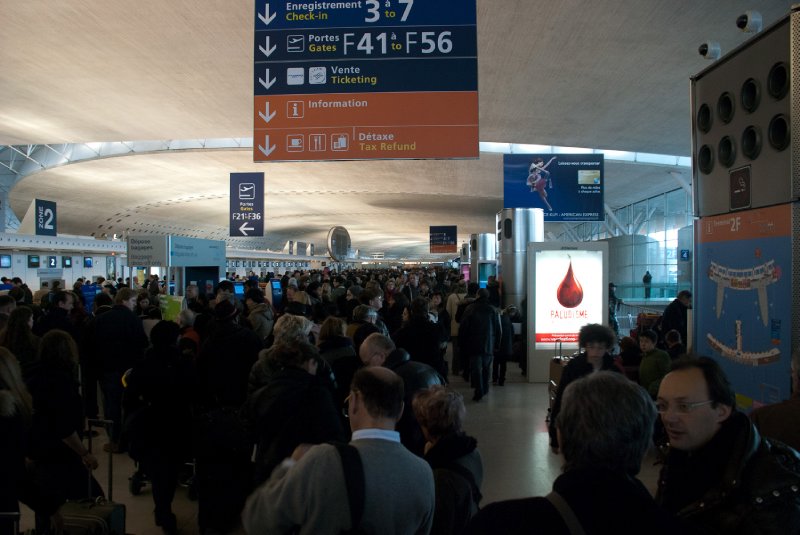 Chaos in the terminal

I had been looking forward to a nice night in another hotel, so was somewhat dismayed to be told that they only provided one night, so I was on my own. By this time it was past 10.00pm, and as I had to be back at 6.30 the next morning, there seemed no point even trying to to leave. So, like countless others, I settled down to an uncomfortable night on the terminus floor. Dinner was half an abandoned ham and cheese baguette and I managed to get hold of a couple of cardboard boxes, which became my mattress, and a single blanket, which kept me from freezing. Still, I've had better night's sleep.

The next morning I was up early, cautiously optimistic that surely Heathrow would have opened by now, even though the snow was still falling in Paris. Unfortunately, my hopes were dashed and by 8.00am my flight had been first delayed, then cancelled. By this time I'd given up hope of getting a flight for a couple more days, and couldn't face another soul-destroying day of queueing. I'd managed to briefly speak to my parents the night before, and they'd suggested that getting the ferry from Calais was a possible alternative. So I abandoned my luggage and set off with nothing but the clothes on my back for one final epic adventure. 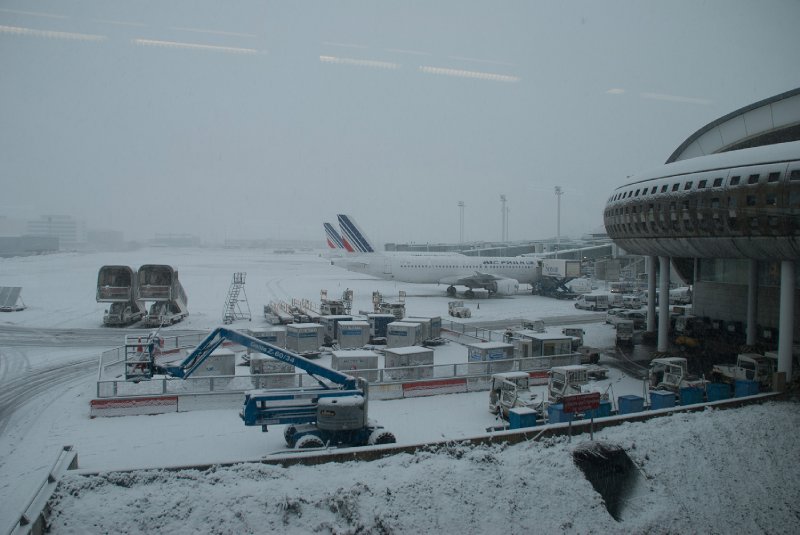 The first leg involved catching a TGV to Lille - amazingly it even departed on time, although by the time it arrived at Lille it was an hour late and I'd missed my connection to Calais. By now,, I'd bumped into quite a few other Brits trying to do the same thing, so we milled around Lille station trying to figure out what our options were, as almost all the trains were now delayed or cancelled. Eventually, after an hour or so of standing there shivering (still regretting my lack of clothing), we were told to cross Lille to another station, where after another hour of standing around, a train left that was supposed to get us halfway to Calais. This train dropped us off at a tiny little place in the middle of nowhere, and we were all seriously worried about whether we'd ever make it to Calais. Fortunately another train did come along and we all jumped on, feeling pretty relieved to have at least made it as far as Calais.

It was 7.30pm by the time we arrived, and a train full of Brits poured off into the street, trying to figure out how to get to the ferry terminal. It seemed that buses were somewhere between rare and non-existent, so the majority of us decided to walk the mile and a half through the snow to the terminal. If nothing else, at least it kept me warm! Nobody knew how many ferries there would be, or if they would be fully booked, so there was a bit of a mad dash just in case there were only a few places left. Fortunately, there turned out to be loads of room, and after buying our tickets we all stumbled into the waiting room, flooded with relief that finally I was going to make it back into the country.

The crossing passed quickly; I just collapsed in a chair and dozed, feeling slightly bemused at being back in a fully English-speaking environment for the first time in 6 months. We docked in Dover at 9.30, and I stepped off the boat to set foot in England on day 195 of my travels, not quite how I'd expected, but still a good feeling. Amazingly, a heroic bus driver had opted to keep on working late past the normal time the buses stop running to take us to the station just in time to jump on the last train to London.

I'd already got much further in one day than I'd dared hope, but I knew there was no chance of getting back to my parents that night, so hopped on the last tube to my friend George's flat, hoping I'd be able to get hold of him. The frustration of travelling without a mobile was really kicking in - I had no way of contacting anyone or even have any numbers to use with a pay phone, and had to rely on being able to wake George up at 12.30am. Unfortunately, he was fast asleep, and my frantic buzzing on his intercom was put down to a dream/drunken students, leaving me stuck in the street. My last hope was my other friends Rowan and Ali, who I was living with before I went away. So after a taxi ride across London, I was ringing on their doorbell, praying for an answer. Fortunately, they have a ground floor flat, and a combination of doorbell and banging on their window managed to get their attention, and they sleepily and somewhat confused let me in and gave me a bed for the first time in 52 hours (thanks guys, I still owe you!).

The next morning I awoke feeling slightly less exhausted and, after finally making contact with my parents, completed the last leg of my fairly epic journey, travelling down to Surrey and a final reunion with the family. The whole trip took about 90 hours, compared to the 20 or so it should have and certainly made for a slightly more exciting ending to the whole journey than I had anticipated!

Posted by Davelanky 02:20 Archived in France

The journey was AWESOME. I'd really like to do something like this one day. Can you tell my - how much did this journey cost you?