I arrived in Buenos Aires to a slightly strange feeling of deja vue, stepping out onto the main street just as I had 180 days earlier, although the temperature was at least 15 degrees hotter this time! I met back up with Boaz, Jeroen and Bear from Patagonia, and was looking forward to a few days of partying before I had to come home. My first night lived up to expectations, first a nice steak dinner with almost all of the guys from the Navimag ferry/Patagonia, which was enlivened by a crash right outside the restaurant. Fortunately we had a doctor amongst us, so Sandra got to race outside and help out until the ambulance arrived, whilst we sat inside and stuffed ourselves with meat. Then we headed back to the hostel for a couple of hours of partying there, before eventually (at 2.00am!) heading off to a crazy club called club 69, where we danced the night away. I eventually made it back to the hostel at 7.00am, just in time to fall into bed for a couple of hours kip.

Friday dawned to heavy rain and cold temperatures, not what I was expecting from BA in the middle of summer. Boaz and Jeroen had spent the previous day trying to persuade me to come to an Armin van Buueren gig that night (a huge Dutch DJ for those of you wondering). After spending the whole morning umming and erring, I finally decided to go for it, and rushed out to get my ticket. The rest of the day was spent pottering around, hoping the rain would clear and recovering from the previous night. After pizza at the hostel we headed out to the venue, a vast semi-outdoor arena, fortunately with a roof. Things had already started when we got there, but the atmosphere soon reached fever pitch as the arena filled up and the music volume played. The gig started with Armin playing from behind a screen for the first hour, with a succession of guest singers and dancers keeping us entertained. Soon it was time for Armin to appear - the huge screen disappeared and here he was behind a vast mixing desk. The next few hours flew by as we bounced along to a series of amazing tunes and all too soon we were making our weary way back to the hostel for an early night (well 3.00am so better than last night!). 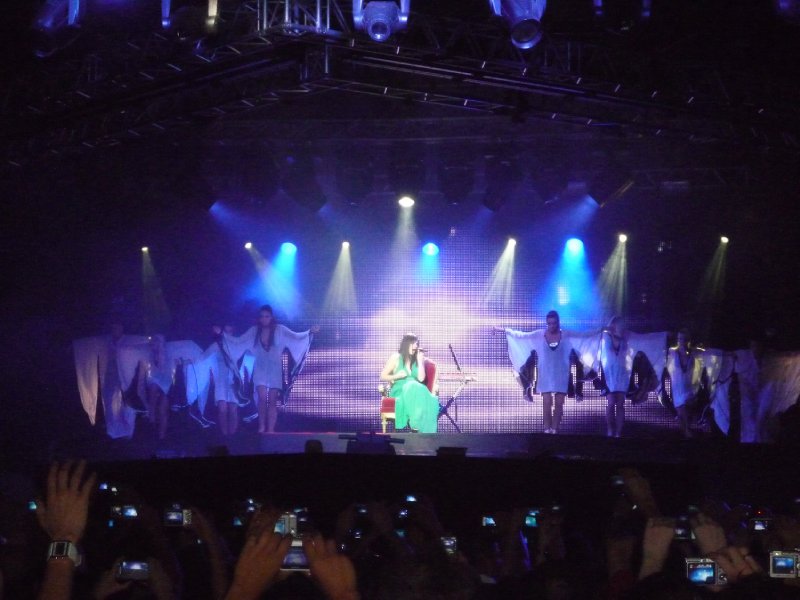 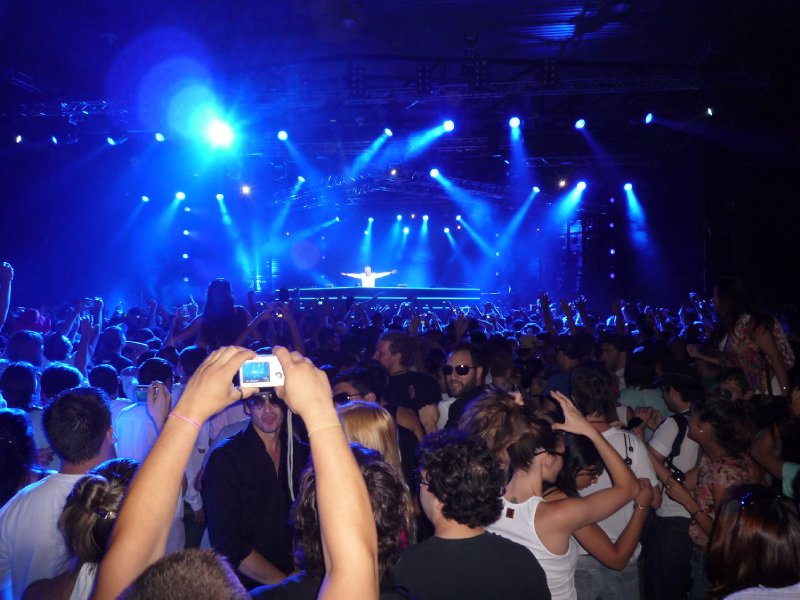 Armin unveils himself to an ecstatic crowd 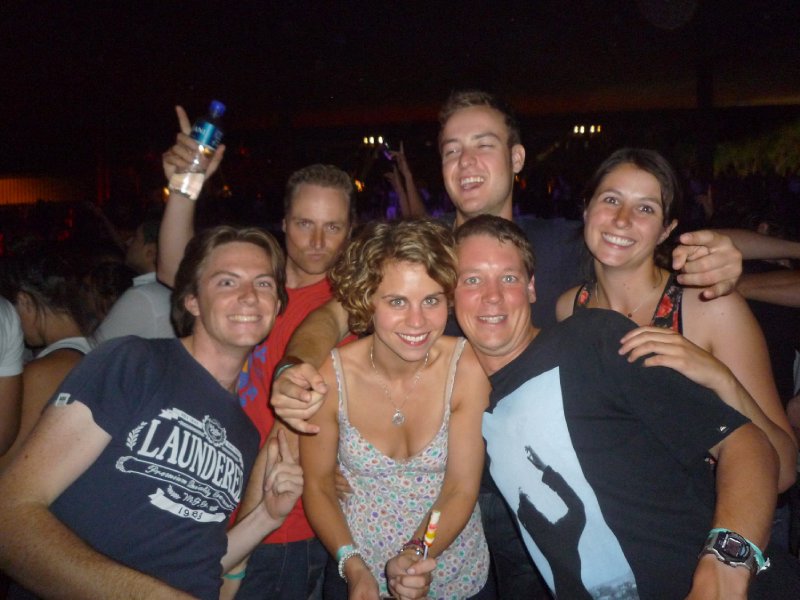 The next day we were up in decent time ready to head to Uruguay for a couple of days. We caught the ferry across to Colonia, then straight onto a bus to the capital, Montevideo. The sun was shining when we set off, but by the time we'd reached the hostel it had clouded over and started pouring with rain again, with a forecast of at least a couple more days of rain. This completely ruined my plans for a few days on the beaches of Uruguay topping up my tan, so we replanned and decided to stay another day in Montevideo. The rest of the day was spent hiding from the rain before heading our for another night of partying. We managed to befriend a group of local girls and spent the night dancing away, staggering home yet again at 6.00am. 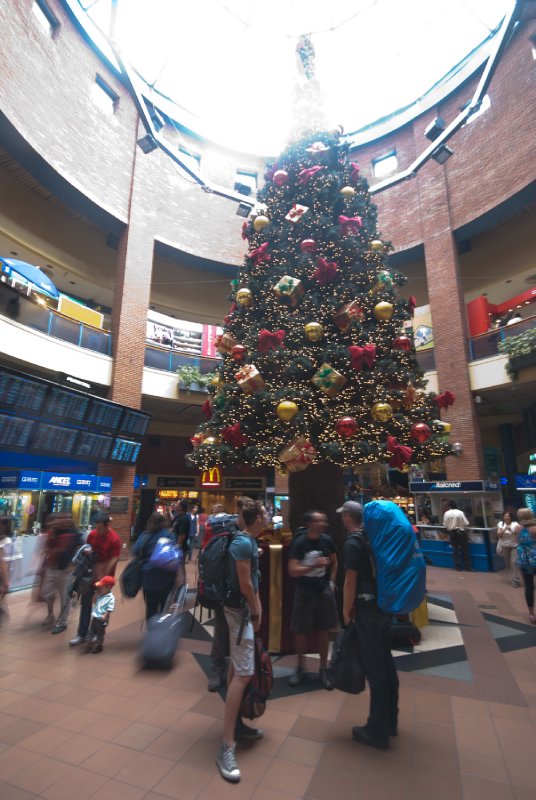 Getting in the Christmas spirit

The next day dawned grey and cold (just 10 degrees!), but at least the rain cleared up by mid-morning. Our first destination was the Estadio Centenario, host of the very first football World Cup in 1930 and now home to a really interesting museum. I hadn't even known the world cup was hosted here, let alone that Uruguay were the best team in the world in the 1920's and 30's, winning two olympic golds as well as the first world cup. It was fascinating to walk round the stadium and the museum. 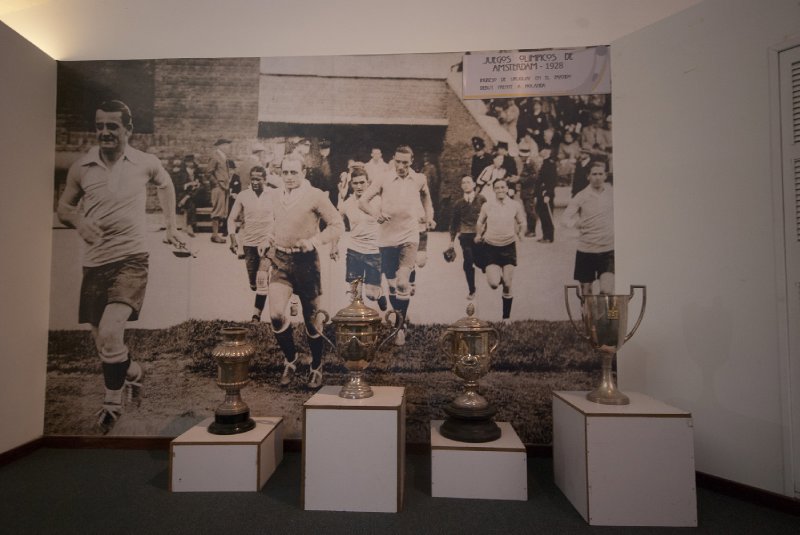 The Uruguayan team from the 30's

Afterwards we went for a wander round the city, which I can't say particularly caught my imagination -a mostly grey and fairly uninspiring place (though the weather didn't help). 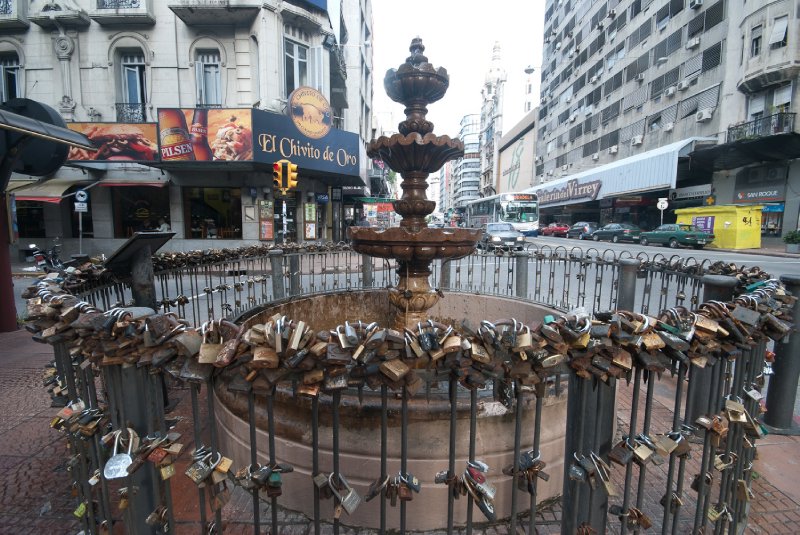 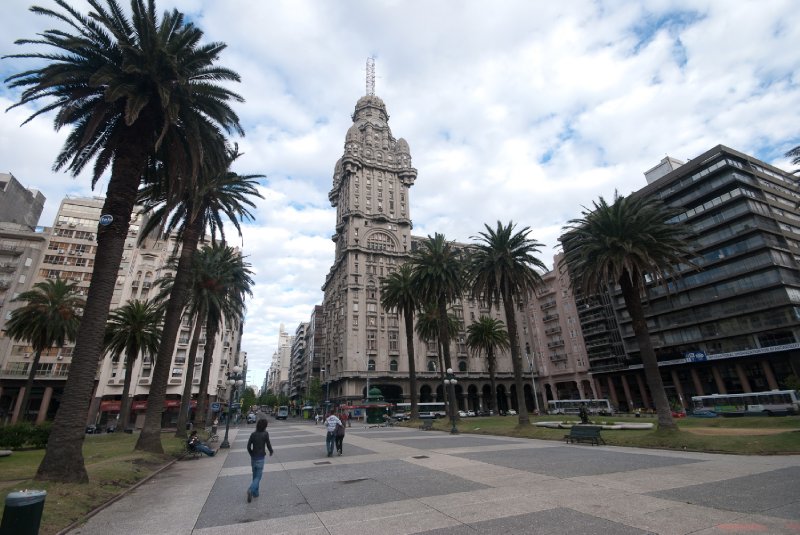 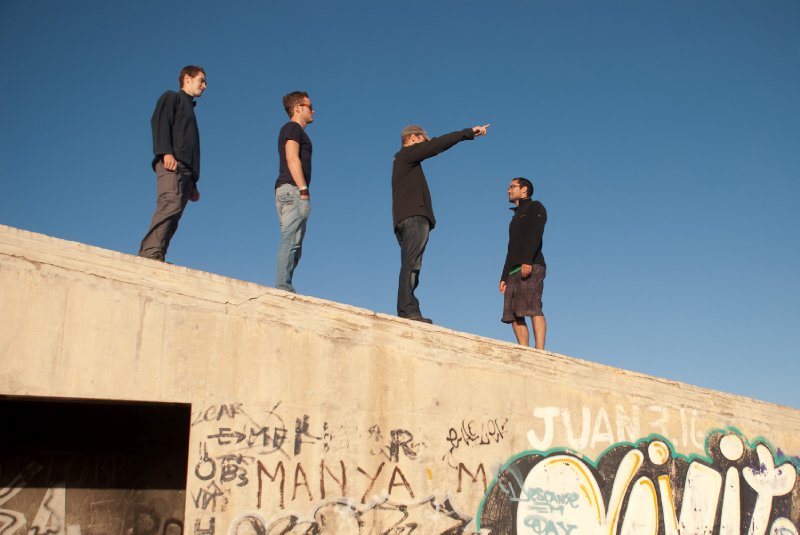 The guys think about forming a boy band

The next morning, we were up early to catch a bus back to Colonia del Sacramento, a beautiful little town on the waterfront opposite Buenos Aires. The town was founded by the Portugese in about 1680; either to keep an eye on the Spanish in Argentina, or to aid smuggling, depending on who you believe. The town changed hands between the Portugese and Spanish numerous times over the next 140 years before becoming formally part of Brazil in 1816. Fortunately it has retained most of its colonial architecture and is a beautiful place filled with tree lined roads and gorgeous houses. 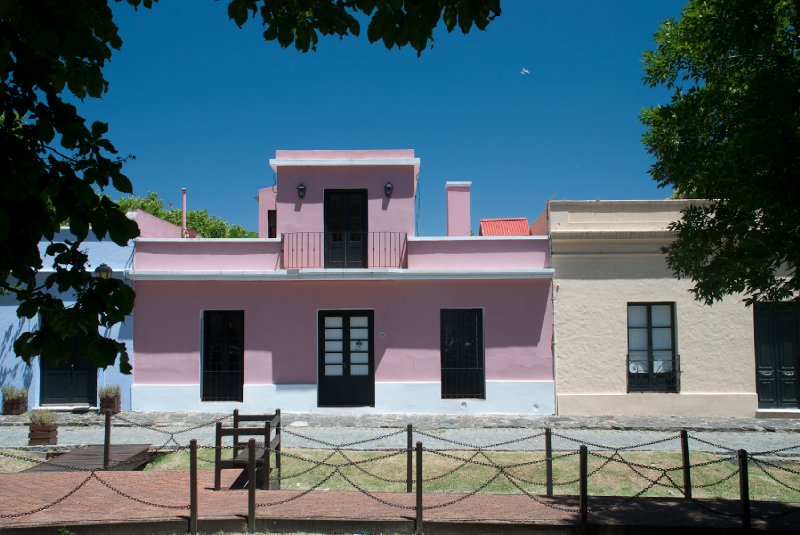 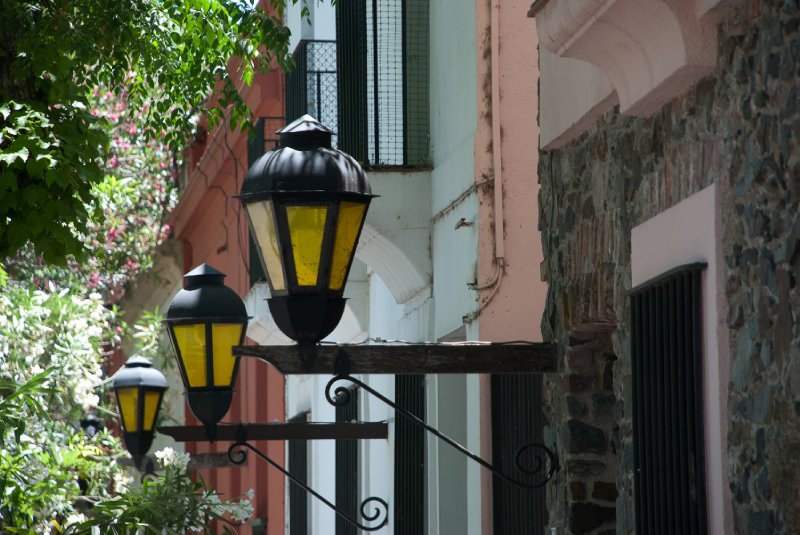 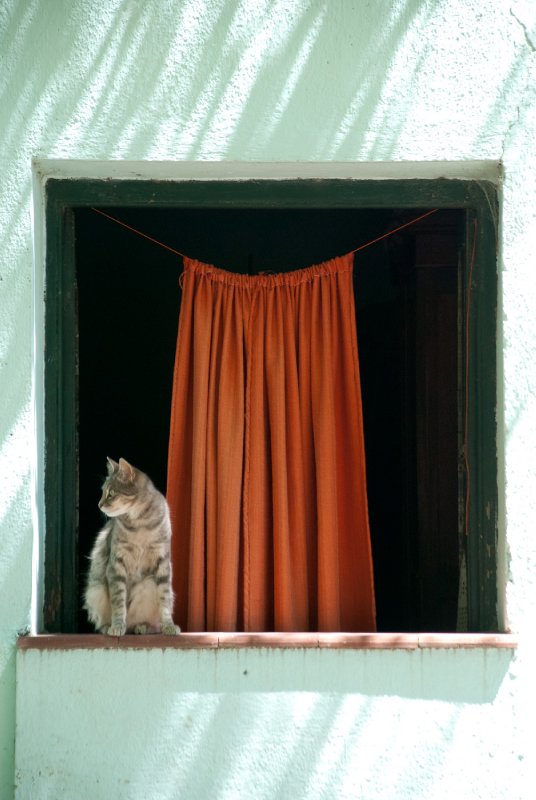 The sun had returned and we had a lovely day exploring the city, culminating in a delicious dinner on the waterfront with a spectacular sunset as a backdrop. This was slightly tinged with sadness as I knew it was probably the last sunset of the trip, but at least I went out with a good one. 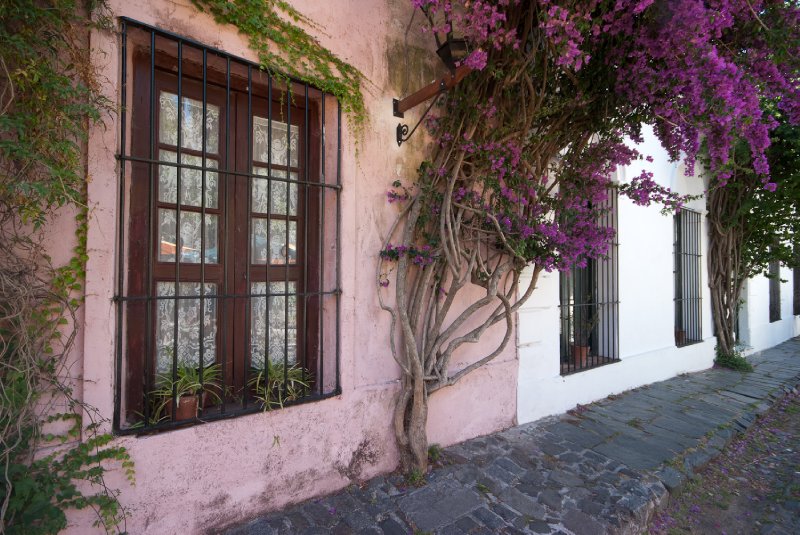 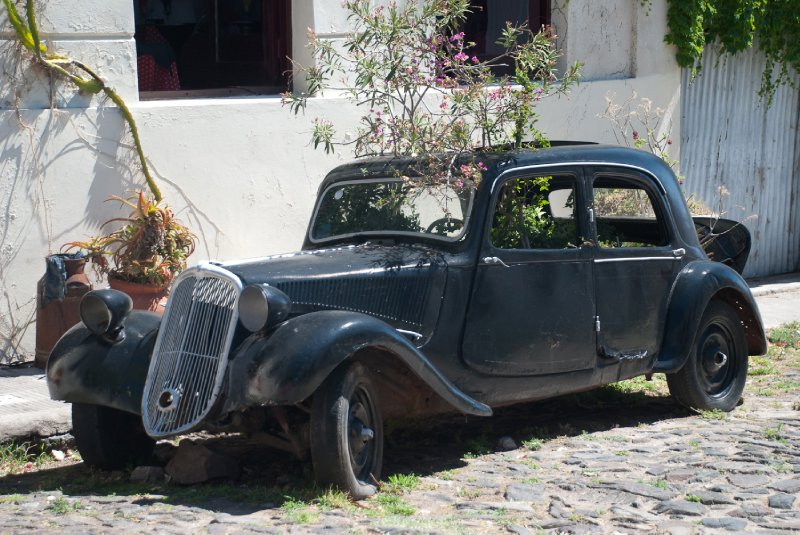 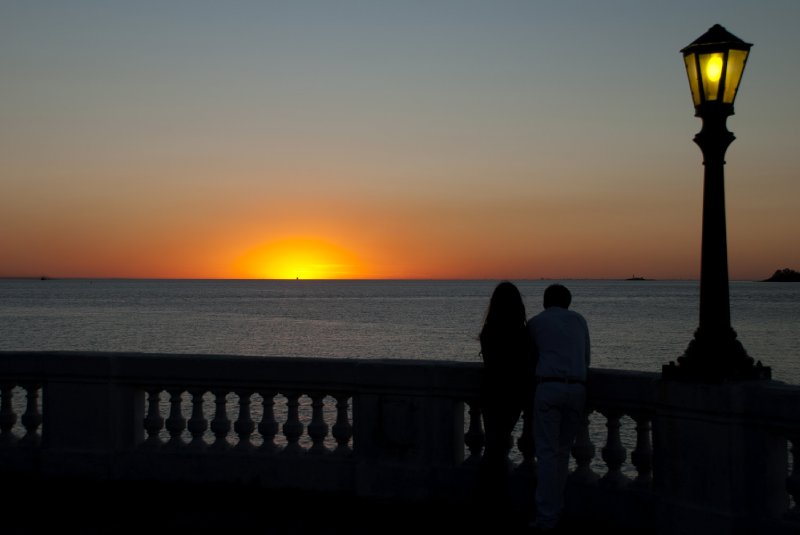 last sunset of the trip

The next day we headed back to BA, for my last four days of the trip. We had one final day together, culminating in one last steak dinner and then a slightly random night at a club mostly occupied by breakdancers having a dance-off. The others all headed off in different directions the next morning, so we said our final goodbyes and I was left on my own for the first time in quite a while. 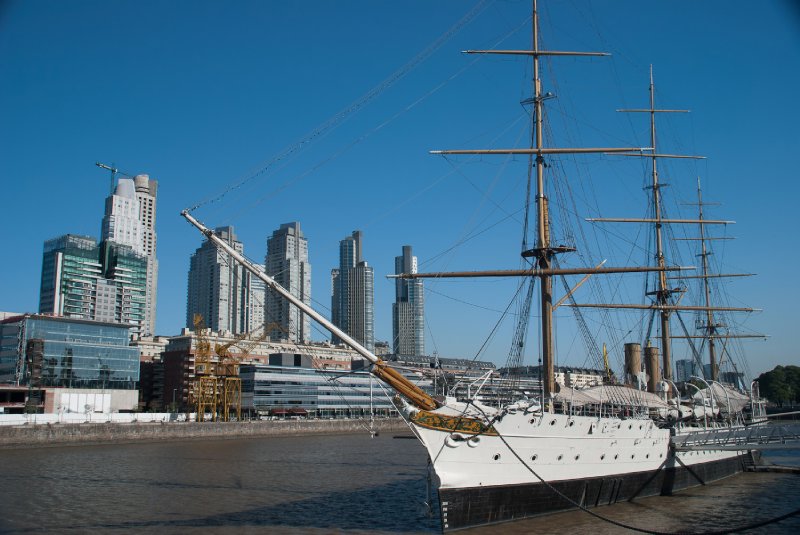 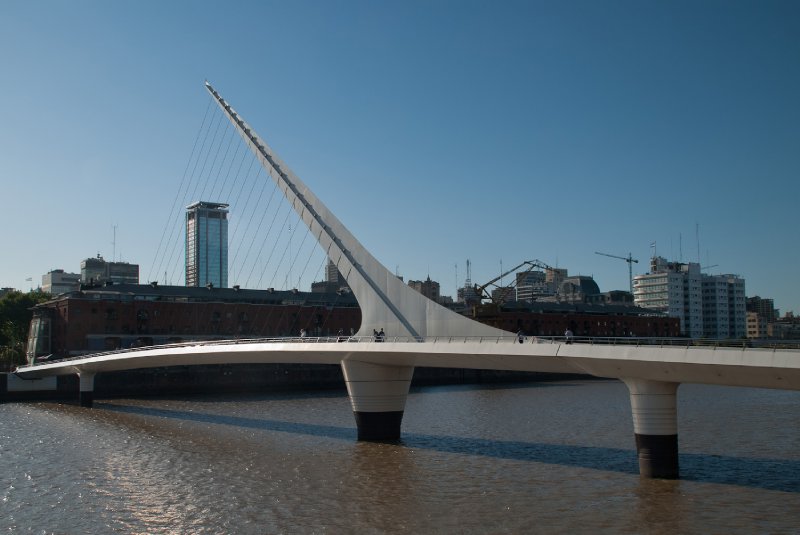 I took advantage of this to get on a street art tour of BA. This was brilliant- there is a long history of street art as a form of protest in Argentina, starting during the rule of the military junta in the 1970's, but resurgent following the financial crisis of 2003. There is now a group of artists who decorate blank walls all over the city, aiming to amuse and entertain more than protest these days. A lot of them are professional graphic artists or have done fine art degrees, and the quality of the work is amazing. The three hour tour flew by, ending at a bar/gallery run by some of the artists. They were hosting an end of year show and I managed to pick up a really cool little piece as a memento. That night involved yet another night of partying, though I was tucked up in bed by 3.00am, an early bed compared to what I was getting used to. 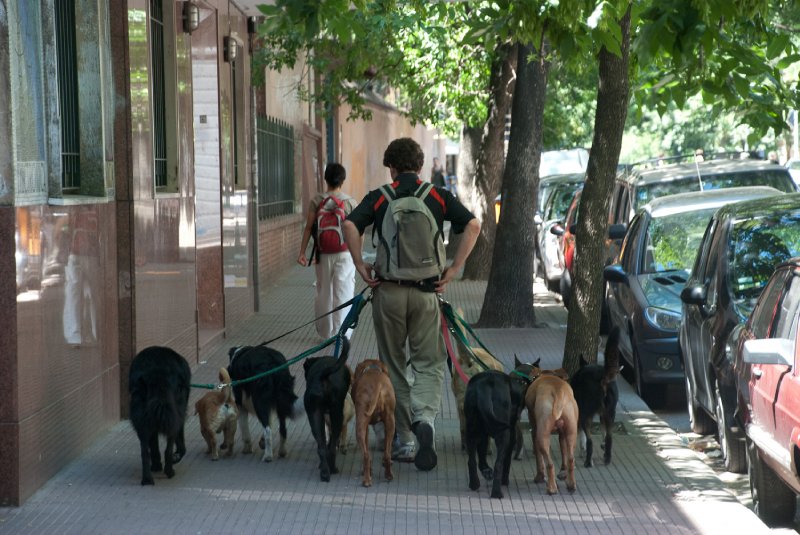 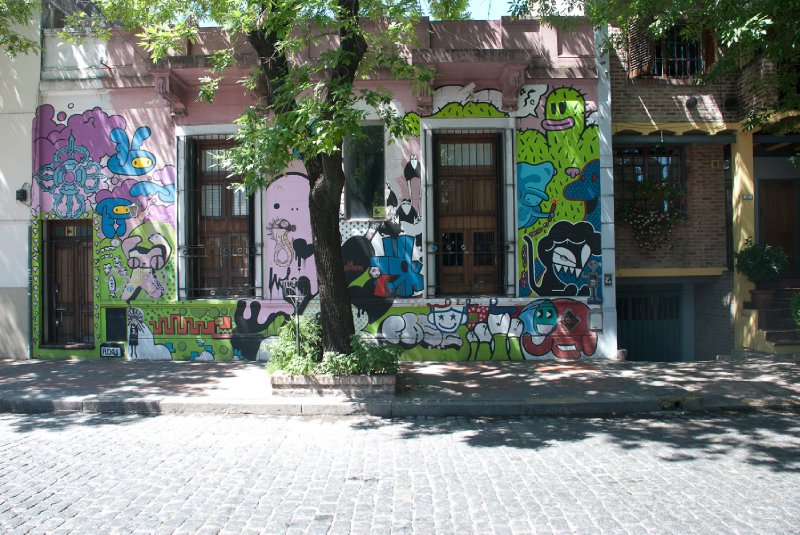 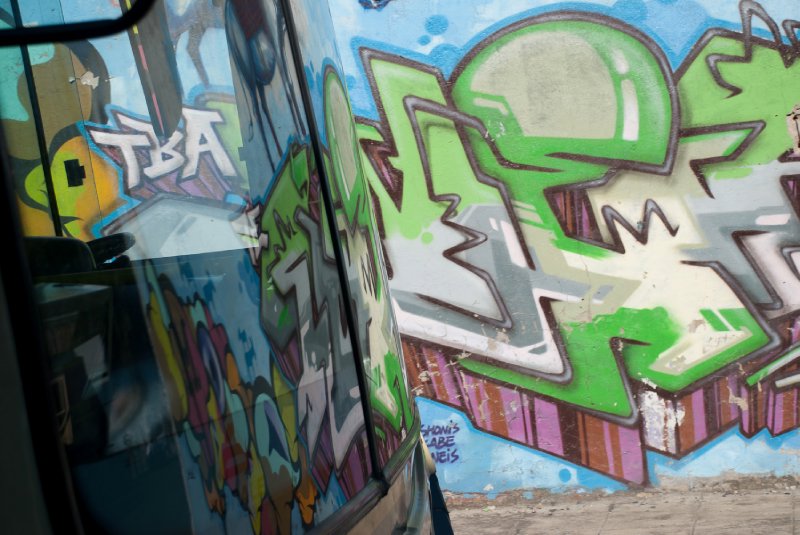 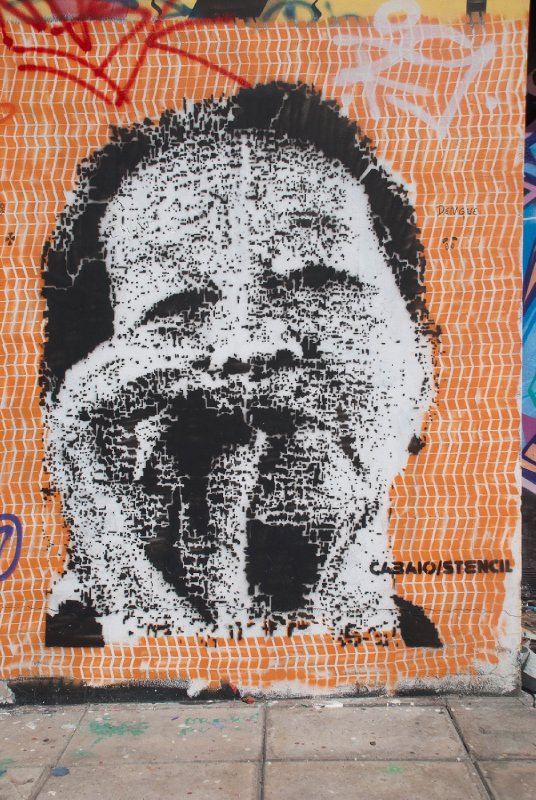 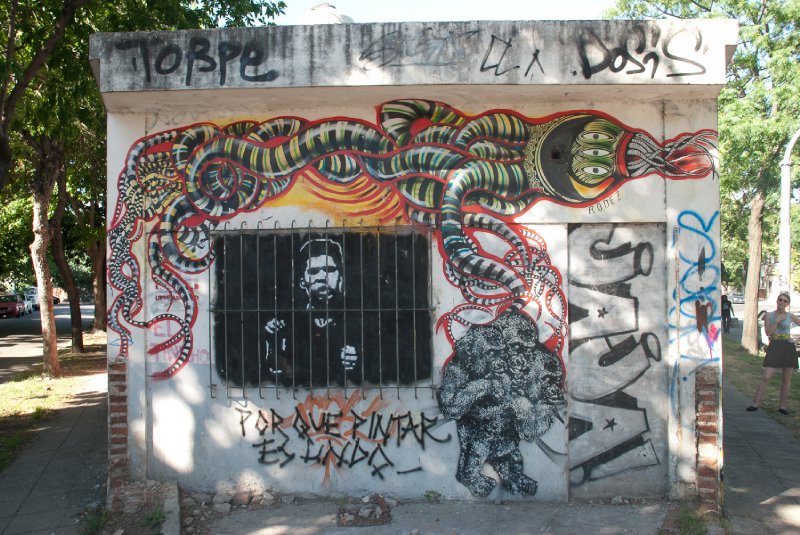 The next day, my final full day in BA, was spent trying to soak up as much sun as possible, whilst wandering around enjoying the views for the last time. I had met up with Lexie and Kat, a couple of girls from the hostel and we had a nice afternoon walking round some of the parks and the Japanese gardens. That evening we went to what was supposed to be a tango show at a restaurant, which was one of the few things left on my list of things to do. Unfortunately it turned out to be just a singer, although she was very good, singing some traditional and very evocative songs. Afterwards, I headed back to the hostel, for a couple of hours of taking the piss out of any Australians I could find over the cricket (we were winning at that point), before heading out for a final night at club 69. 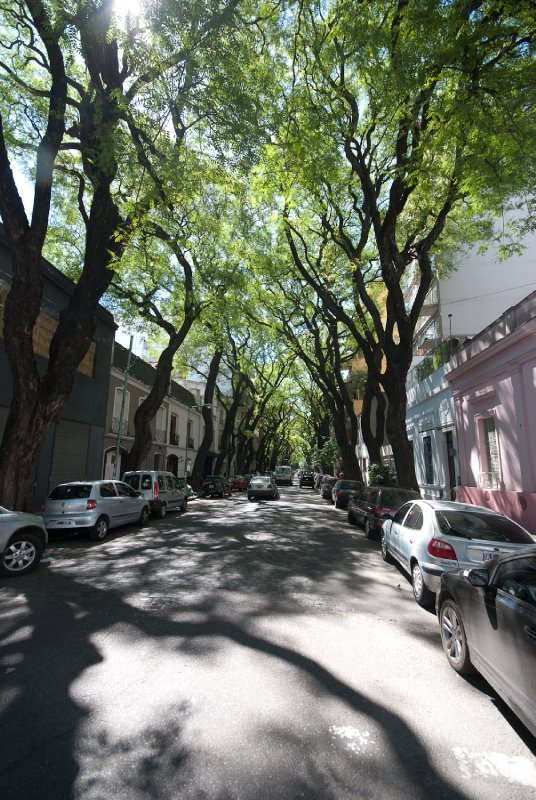 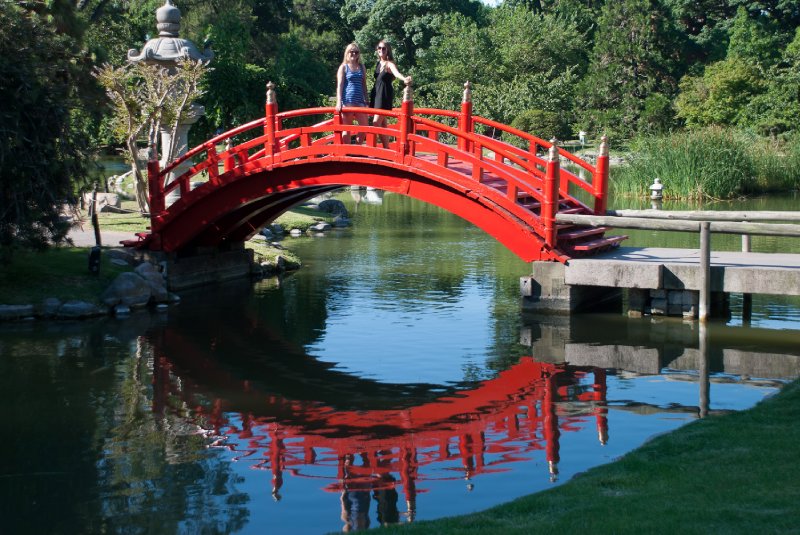 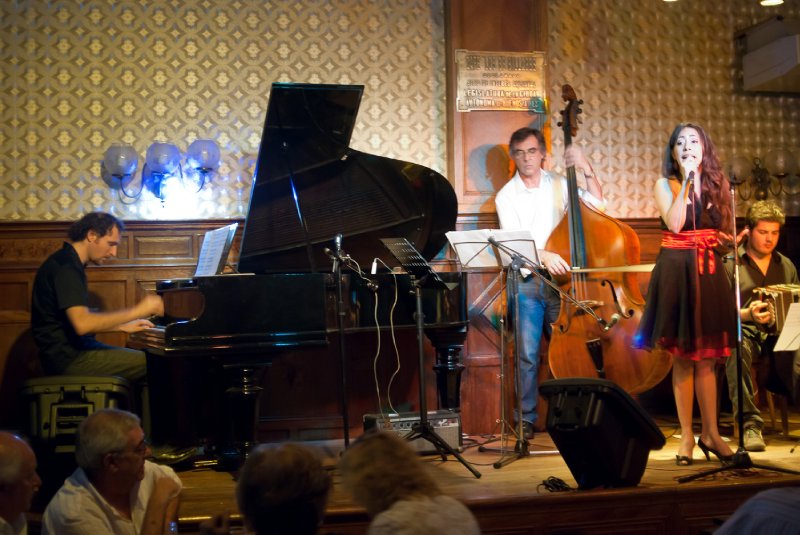 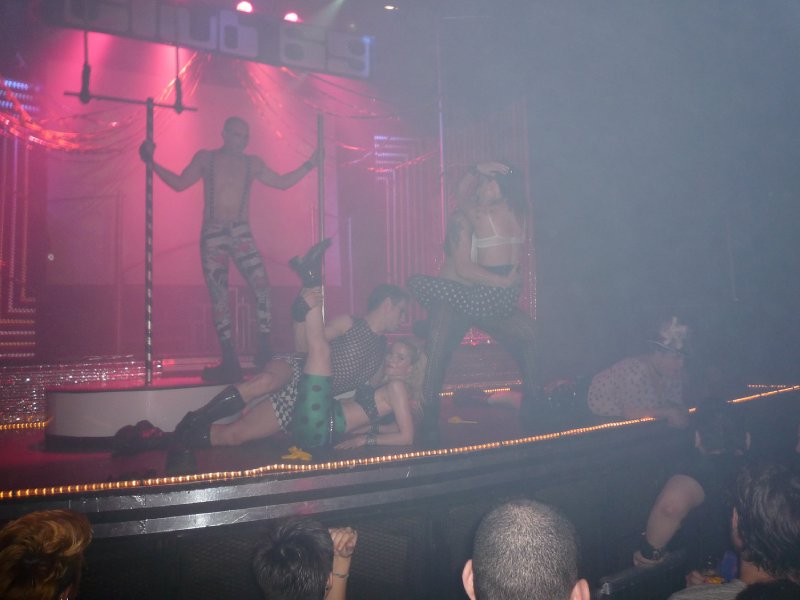 The next day I didn't have time for much other than a bit of shopping and a last wander round Palermo, one of the nicest neighbourhoods in BA. One final delicious meal, then it was time to head for the airport and what should have been a brief flight home.......

Posted by Davelanky 11:43 Archived in Argentina

Previous Next Table of contents