The steaks are high, but why wine?

My flight landed in Santiago and I left the airport in temperatures of 25 degrees plus and the feeling of the sun on my face, a great sensation after nearly four weeks of mostly being cold and windswept down in Patagonia. I only had 24 hours in Santiago, which I spent revisiting a few areas I'd been to before and just enjoying the warmth. I also encountered my first reminder it was almost Christmas, with a huge tree under construction in the main square. It was a weird feeling to be there in the warmth thinking about Christmas, but at least I didn't have to listen to annoying songs for the next few weeks in every shop and restaurant, unlike in London! 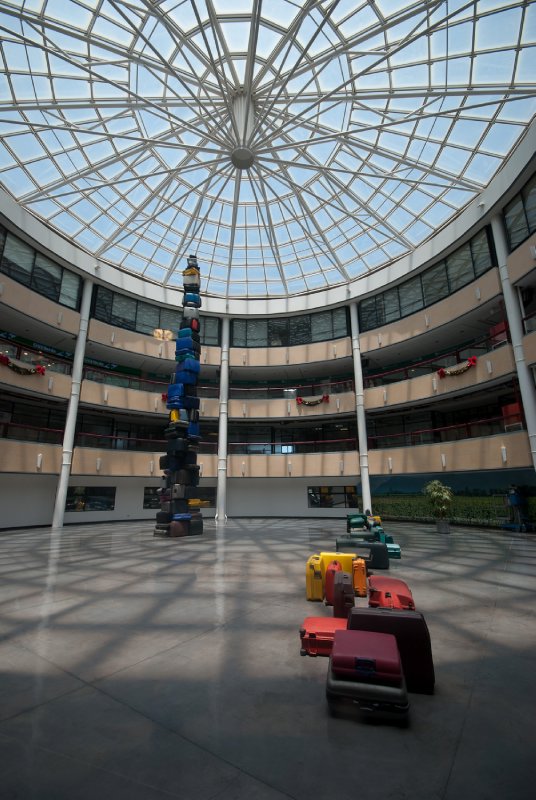 Comedy sculpture at the airport 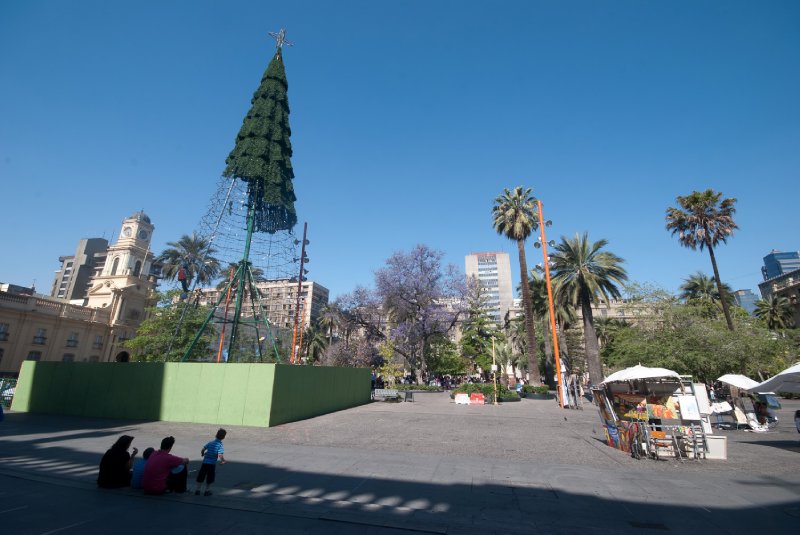 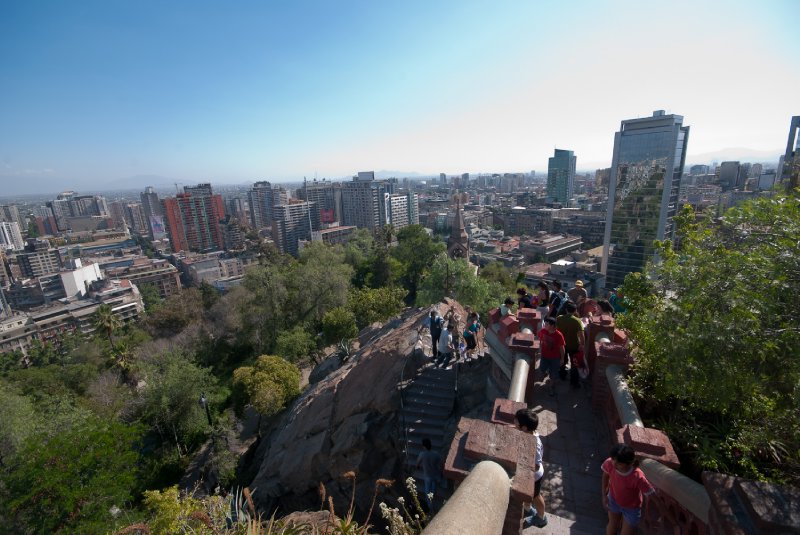 Views from the centre of town

The next day I caught the bus to Mendoza; a 7hr trip that took most of the day. We passed through the vineyards of Chile, before heading into the mountains and crossing over some spectacular mountain passes. I had a particular feeling of deja vue at one point when I was conftonted by exactly the same view I had admired on my friends Ali and Rowan's blog, back when I was first planning my trip (although their picture was better than mine!). We caught just a brief glimpse of Aconcagua as we crossed the border and soon started descending towards Mendoza, passing through yet more vineyards as we did so. 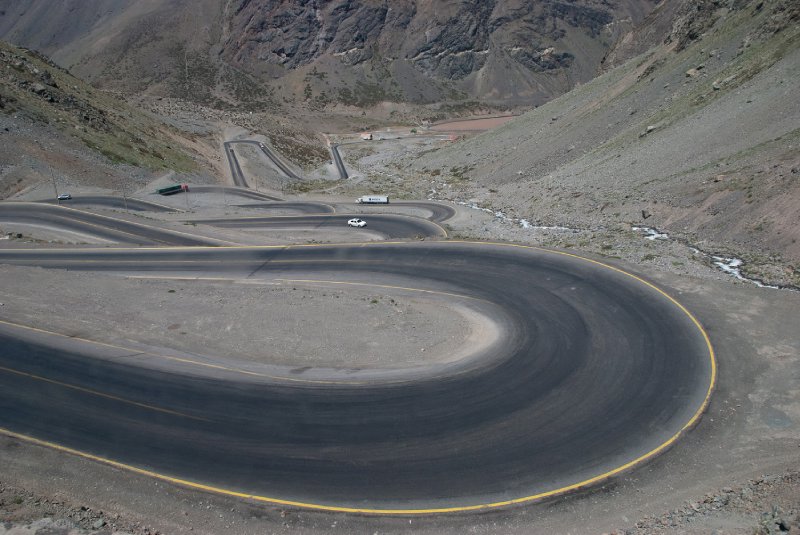 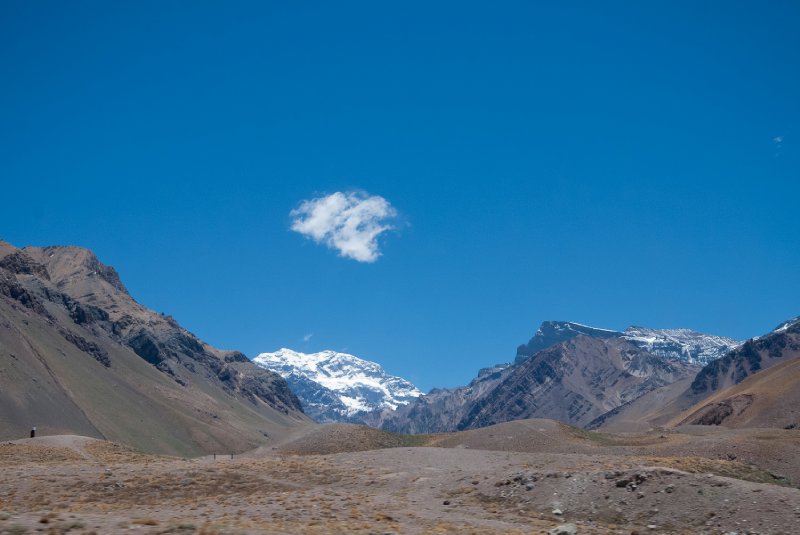 I'd chosen to stay in a popular place called the Damajuana Hostel in the party area of town, and was welcomed in by the offer of a BBQ at the hostel, my first for ages. This turned out to be huge, with a ridiculous amount of meat chucked on the grill, definitely a good way to be welcomed back to Argentina. 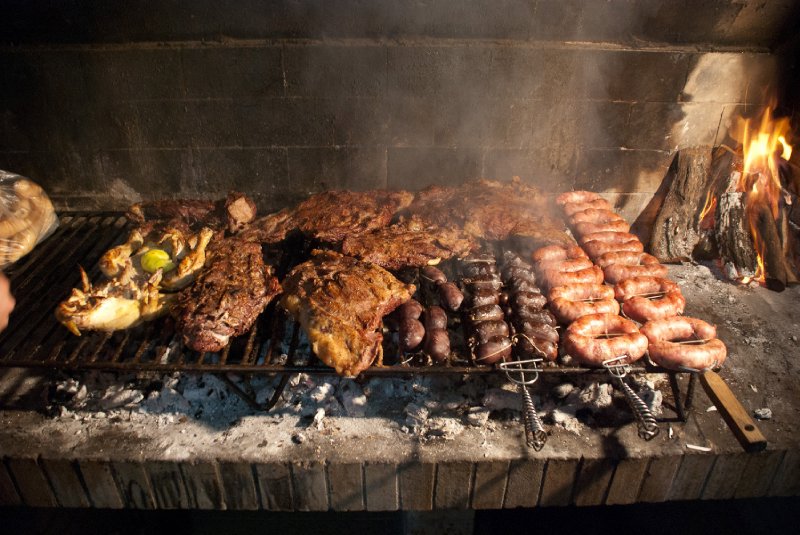 After another night out and a few hours sleep, I was up bright and early for my biking wine tour. This was something I had been looking forward to for ages, and was one of the main reasons I had chosen to head back to Buenos Aires via Mendoza. I'd joined up with a few others from the hostel for the day, so we had a nice mix of people. We were picked up and taken out to the main wine growing region, where we were dropped off at Bikes and Wine, our tour organiser. Here we were plied with water (not a bad thing afer the night before and seeing that the temperature was in the mid 30's) and briefed on the wineries we could visit. Once settled on a route we pedalled off, cycling to the end of the valley before working our way more slowly back to the shop. Once out of the town, the route was a beautiful quiet road, shaded by huge, old trees, and with views over the green vineyards to the mountains beyond. It was all very lovely, and a great way to start the day. 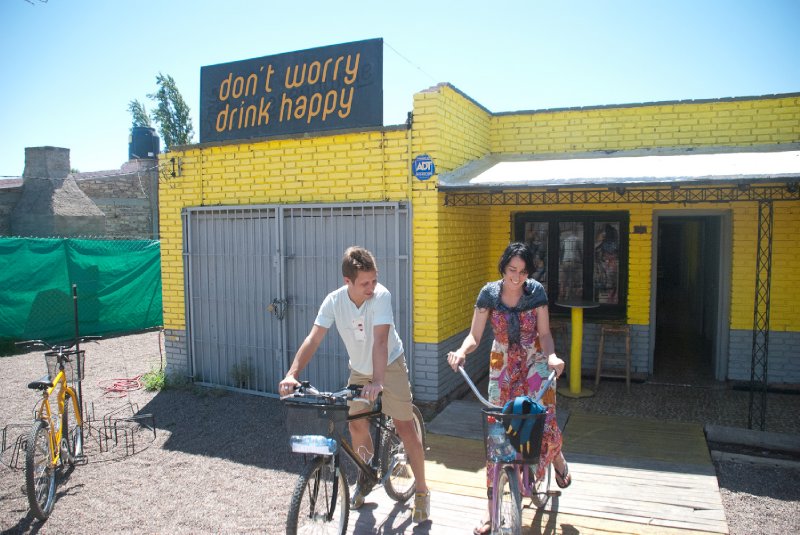 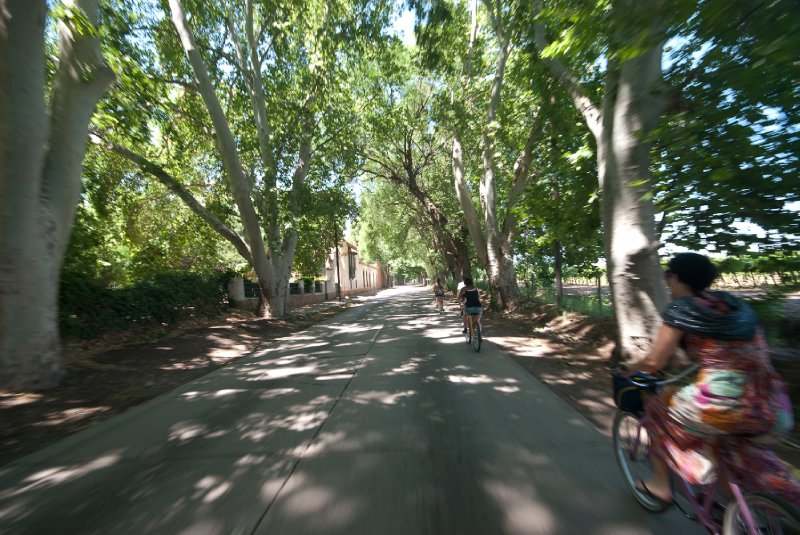 Our first stop was a small boutique winery called Carinae, where we were given a quick tour and a tasting of some not bad Malbecs. Then it was straight across the road to an olive oil producer, where we had another tour and then got to line our stomachs with oil and bread in preparation for the rest of the day's drinking. Another ten minutes on the bike and we were at our third stop . This was one of the oldest and most traditional wineries, and we wrere shown the original brick vats from over 100 years ago. These are now a historic listed structure, partly due to their innovative double tank system, where the wine was first fermented in the top of the tank, then decanted using gravity into a separate lower compartment. We were also shown some of their more prestigious wines, including one which is only made in particularly good years in limited quantities (around 3000 bottles), with each bottle individually signed and numbered. Amazingly it ony cost £20, and I was seriously tempted to get a couple if it hadn't been for the challenge of trying to transport them. Unfortuntaely we weren't allowed to taste these, but still got to enjoy some nice glasses. 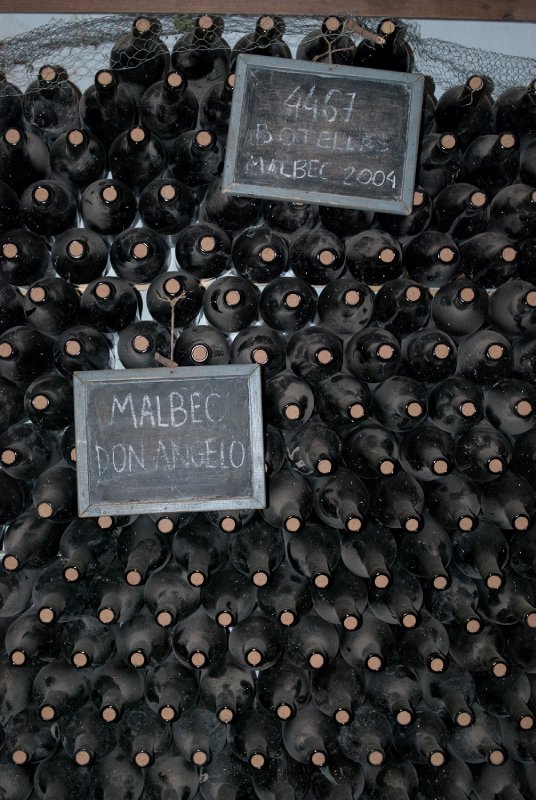 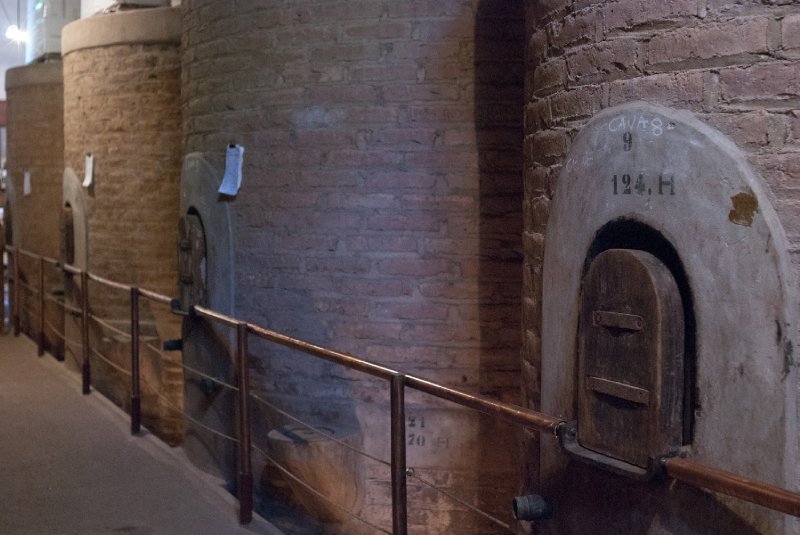 By now it was almost 3 o'clock, so we moved on to the next winery where we stopped for lunch. This was a much more hi-tech affair, with a brand new bodega filled with gleaming stainless steel and with a beautiful rooftop terrace restaurant overlooking the vineyards. We had a very nice meal (with a bottle of wine of course), enjoying the views and the sun. Suddenly we realised that it was past 4.30 already though, and our next and final winery shut at 5.00. We raced down to the bikes and pedalled off frantically, but after a couple of wrong turns arrived to a pair of locked gates at 5.05. Frustrating ly that meant the end of the wine tasting, so after a quick stop at a chocolate shop (for the girls), we pedalled back to Bikes and Wine, where we were treated to another couple of glasses. The journey home almost became a farce when it turned out the buses would only let us on with the correct change but nobody had any and there was nowhere to get any (change is notoriously scarce in Argentina for some reason and often people refuse to sell you things if you don't have exact change!). Fortunately after several buses rejected us and a big argument with the driver of the next bus, a friendly local let us use her swipe card and pay her back en masse. 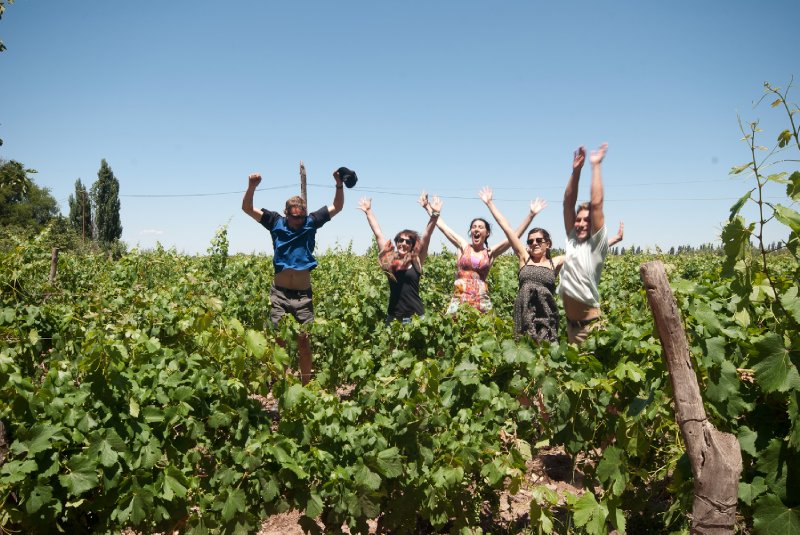 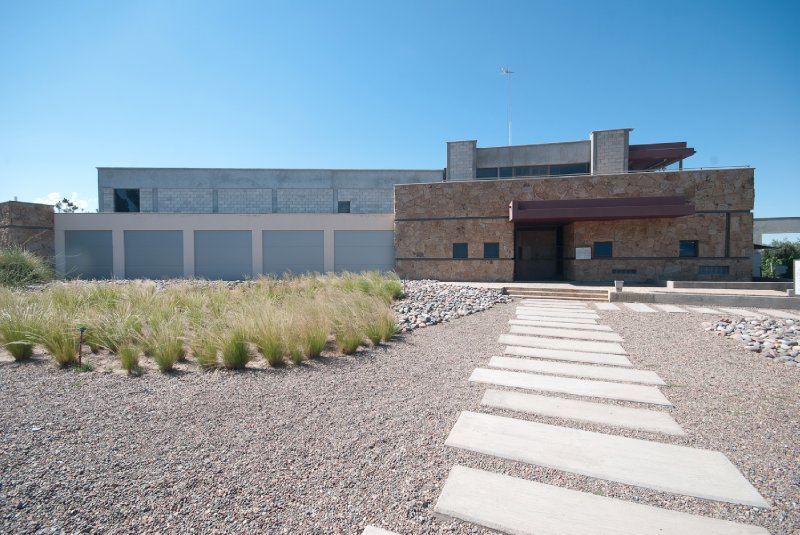 The next day turned out to be a bank holiday, somewhat unfortunately as I had a replacement bank card sent out from England to the HSBC branch here, and I was planning to collect it on that day, doh. I spent the day wandering roudn the centre of town, which was incredibly quiet, with wide boulevards lined with trees providing welcome shade frrm the heat. I stopped for what was probably my best steak on the trip, sitting outside with a half bottle of red and enjoying the atmosphere- definitely a lifestyle I could get used to! After a couple of hours chilling back at the hostel and enjoying the pool, I headed of to catch the overnight bus to Buenos Aires. 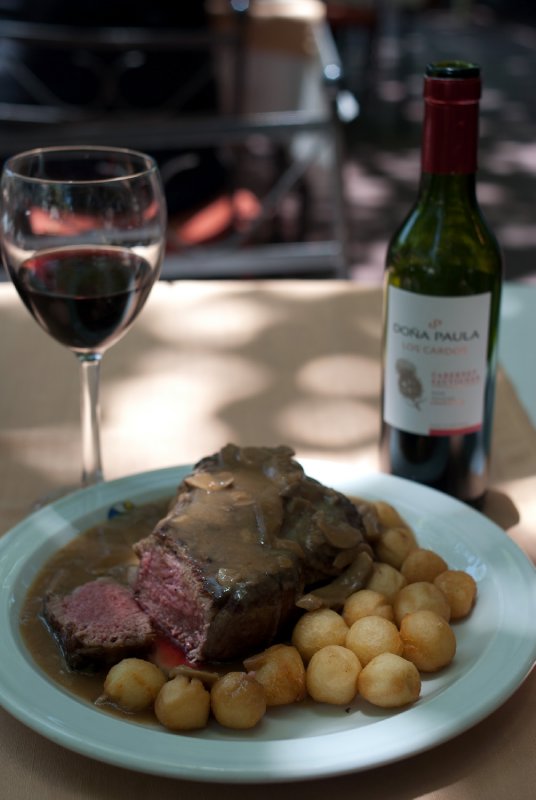 As it was my last long bus ride of the trip, I had treated myself to an Executive class seat, so got to enjoy a fully reclining leather seat, three course meal with champagne and wine and last but by no means least, Andesmar bingo! I got a fairly decent night's sleep and pulled into Buenos Aires feeling fairly refreshed and ready for a last few days of partying....

Previous Next Table of contents